To focus on your writing, get a cat

I am reblogging a post that I wrote in 2010 based on the advice to a would-be writer in Muriel Spark’s novel “A Far Cry from Kensington”: “To focus, get a cat.” I love cats, but sadly have none at the moment. On occasion, our adult daughter has brought her magnificent, marvelous cat with her for a weekend visit. A cat can transform for the better the mood, and even the level of thought, within a house. Here is my blog from 2010: “To focus on your writing, get a cat.” 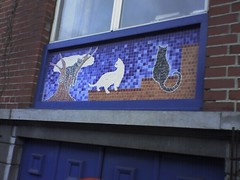 Can’t concentrate?  Having trouble getting into flow with your writing?  Get a cat!

Advice to writers can come from the most interesting places.  An unexpected, but most entertaining source of advice is A Far Cry from Kensington, a novel by British writer Muriel Spark.

A Far Cry takes place in 1954 London.  Mrs. Hawkins, the narrator, has a job in publishing.  And yes, it is she who offers the acutely insightful advice that if you can’t concentrate, get a cat.

In a hilarious dinner party scene, Mrs. Hawkins is seated by a red-faced, watery-eyed Brigadier, who, in response to her question about his having had an interesting life, replies, “Could write a book.”  He hasn’t because he hasn’t been able to concentrate.

Mrs. Hawkins tells him that to concentrate, “you need a cat”:

Alone with a cat in the room where you work . . . the cat will invariably get up on your desk…

Have you heard of a “showrunner”?

Writers in the TV industry are now expected also to manage—or to have the skills and strengths that would allow them to manage.

According to John Wells, Writers Guild of America West president and writer/producer of E.R., Third Watch, and West Wing, it is almost impossible to be just a writer anymore in television.

Instead of “head writer,” the path for the writer is to control the material and make decisions, thus be a  “showrunner.”

Similar to the showrunner, you are managing your career, and an important step on the ladder of your academic career is writing the dissertation. How are you managing the important project of writing your dissertation?  When will you close and deliver the project?

To deliver the dissertation:

What strengths do you think an effective showrunner/ Project  Manager has?

What happens if you look at  your dissertation project through the lens of leadership?

A showrunner/Project Manager has the job of  providing leadership in these areas:

1.  Planning
2.  Scheduling
3.  Organizing and holding to a timeline
4.  Collaborating with team members
5.  Working with superiors/bosses
6.  Managing a budget
7.  Closing the project

How can you encourage and motivate yourself to get things done?  How can you organize tasks to make following through more of a given?

Along with writing content, make sure you are managing your project:

— Closing the project depends on planning, scheduling, and organizing.

–Exercise your strength of working with others.  Don’t hide out to avoid all personal contact with advisors or others who can help you in the process.

You may not be managing a $26-million-dollar budget for a TV show, but consider what it costs you not to make and meet a schedule.

Writing a dissertation is a great time to practice the strength of leadership.  How are you running your show?

I’d love to hear from you

You Ask: How Can I Regain My Motivation? Ask Steve Nash

I usually don’t watch NBA basketball because while the players persevere, for the most part they show little passion or even a sense of fun. But I will watch Steve Nash, the point guard from Canada who has played on several NBA teams and is the winner of the NBA’s Most Valuable Player award.

When Nash plays, he shows both perseverance and passion, and he is fun to watch.

He has been on many talk shows, such as the David Letterman Show.  Not only is Nash bright and personable, but on the Charlie Rose Show, Nash also revealed his leadership ability.

The focus of the Charlie Rose show was leadership.  As a point guard, Nash says he “mothers” the other four players on the team, thinking about what they need and helping them find ways to succeed.

But I found myself wondering even if a man earns the huge amount of money that basketball players receive, what does he do to keep himself motivated and at his best?  How does a 6’1” man, a self-described small guy,  play in the midst of those sharp elbows and huge shoulders?  And how does he stay committed during the long season, the training, the traveling, the endless tournament at the end of the season?

Nash knows what he has to do.  This is what he says:

1) Since he’s a small guy in tough territory, he is creative.  He has to come up with new plays.

2)  He is mentally tough.  When he’s jostled or intimidated, he remains “unflappable” because he has decided that “nothing will bother” him.

3) He has no fear.  Without fear, he can charge into the midst of play.

4) He doesn’t give up because he’s committed “to stay the course.”

He smiles when he says that, and you believe him.

1) Even when you feel you’re out-manned or losing ground, dig deep to find the courage to be fearless.  You will not be intimidated.

2) Like Steve Nash in basketball, you did not get to this level of writing by being a non-starter.  You were training for this long ago. You have everything you need to succeed.

3) Character matters. To be long-lasting, you need grit. Work with both passion and perseverance.

5) And one more thing, Steve Nash plays hard and plays to win because it’s fun.  You can make your work  fun, too—writing is a challenge and challenges are exhilarating.  Choose that perspective.

You ask about motivation?  Having motivation is a choice.  You must choose to use your courage, grit, and mental toughness to tap into your motivation.

Take risks and charge through tough places. And then you, too, will feel the wind in your hair as you run fast in your arena.